To all. Waiting for football kickoffs. Guess I will get some couch potato time today.
B

Staff member
Gold Site Supporter
Thanks John!
Happy Thanksgiving everyone.
We're eating early so my son and his girlfriend can go to her parent's house to eat again later.
Yea, I see some couch potato time in my near future as well. Probably shouldn't as it's going to be a pretty nice day to get things done outside.

Ours already passed in Canada, but Happy Thanksgiving to all my American friends. Hope you all have a good holiday. 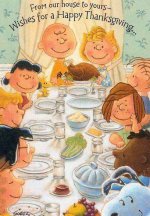