Menu
Log in
Register
Install the app
You are using an out of date browser. It may not display this or other websites correctly.
You should upgrade or use an alternative browser.

Your pockets are a little deeper than mine, a good floor deserves a good planer and you are going to have a ton of fun!

Are you aware of this site? they have one section on sawmills and a million good tips
http://http://www.woodweb.com/KnowledgeBase/KBIndex.html

Your pockets are a little deeper than mine, a good floor deserves a good planer and you are going to have a ton of fun!
Click to expand...

I previously bought a WEN for $250.00. It's OK for small jobs but the knives don't hold up well and I just couldn't see myself dealing with it on a larger project. So yes, the commercial equipment is more expensive but it's better suited for the job. Sucks that equipment is soooo expensive. :-(

Are you aware of this site? they have one section on sawmills and a million good tips
Click to expand...

No I was not, but I am now. Just spent an hour browsing. Lots of good info, thanks, Lee!
L

Gold Site Supporter
I Passed on the Powermatic planer and opted for a Woodmaster 718. It's not only a planer but has the ability to make molding as well. Has a 5 hp motor to run the planer/molding knives and another 1hp motor that powers two rollers that feed the material through the planer. New they are about $3,300, more if you add in what they call the "Power Pack" which consists of gang rip saws, drum sanding kit, and an accessory shaft which can be loaded up with molding knives for quickly changing from planer mode to molding mode.

I found a used Woodmaster 718 on eBay for $2,200. Had the Power Pack included as well as a bunch of extra knives and accessories. Had to drive 500 miles to pick it up and another 500 miles to bring it back home, but it was worth the drive for the money saved.

Read the book, wired it up and ran my first piece of 1X6 through it last night. There was already a molder knife attached so I just used what was in it. A very simple piece of 1X6 went in one side and a really cool piece of 1X6 baseboard came out the other! I was elated!

On an aside, I cut 8 more 6X6X12 pine beams for my (soon to be) sawmill shed. Also got a bunch of 1X12X12 boards which are absolutely beautiful. Was kind of weird because in the middle of the log I ran into a bunch of “lighter”. I always assumed that “lighter” came from a tree that had died and was seasoning over time. Turns out it exists inside of a live tree. It’s hell on the blade though!

Had my very first customer come by and pick up some 4X4s. Not a big sale but now he’s a customer and will order more in the future. Gotta start somewhere, right?

Gold Site Supporter
Saved this old tree from the woodpile. You just never know what you're gonna find once you open them up! Would have been a crime to burn this up.

Staff member
Gold Site Supporter
Then I'm a criminal. I burn it all.

bczoom said:
Then I'm a criminal. I burn it all.
Click to expand...

Yep, I did too until I got a sawmill. Who knew what was waiting inside all those logs! I think there's a few really nice tables in that log, probably several thousand dollars worth, and that's a whole lot better than firewood!

Gold Site Supporter
This was one of the first cuts that came off of the log. Looks kind of like a fish, or maybe a duck, or maybe a dear head??? I think there's even a young squirrel's head in there. Anyhow, when it's dry and has been sanded, stained and finished it should look pretty nice hanging on the wall. It'll be one of those over-the-top wall hangings that everyone sees something different in.

Staff member
Gold Site Supporter
A fish or a duck??? I see a rifle.

Gold Site Supporter
I'm building an RV Park and each site has a gazebo with a bar area, so I cut some Poplar to build the bar out of. It was a rather large tree and barely fit on the mill. But the end result is nice and it should make some nice bar's and counters. 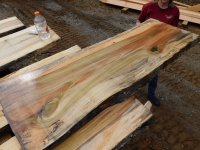 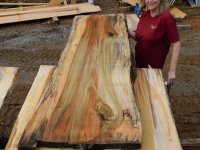 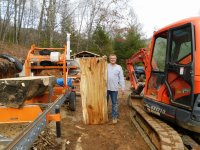 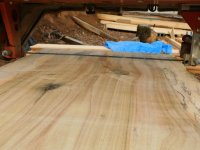 Staff member
Gold Site Supporter
Sweet! Nice to see you back on the forum.

bczoom said:
Sweet! Nice to see you back on the forum.
Click to expand...

Hi BC, hope things have been well with you. I've been busy putting an RV Park together. Each site (there are 8) will have a private gazebo with a preparation counter, running water and a refrigerator with ice maker. Not your average RV Park, right? lol

Anyhow, been using the mill to cut the wood we use on the gazebos. It's been tough given the rain/snow just won't go away. Here's a couple of pics of the gazebos. 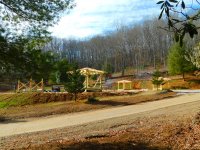 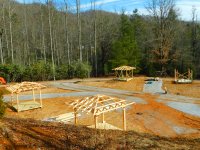 Staff member
Gold Site Supporter
What happened to the last house you were working on? As I recall, you were putting a new deck on it.
I too have been playing with real estate. Bought another house in 2018, and did a complete renovation on it. It took nearly a year to complete but was doing a lot of the the work myself. Every room gutted to drywall and bare floor then rebuilt. Exterior got new windows, siding, roof... Pic below.
We're buying a condo in Florida this coming week to have as a winter/vacation place. 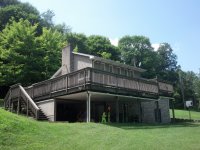 bczoom said:
What happened to the last house you were working on? As I recall, you were putting a new deck on it.
Click to expand...

Gosh BC, I don't remember which one that might have been. I've got 8 now that I rent out, several others that I've sold. I have to be careful on flipping them as I can only make so much money before it affects my SS. (wow, never thought I'd here myself say that.)

Your house looks great! Sounds like a very aggressive remodel. And congrats on the condo in FL. I'm looking for a (cheap) piece of land in FL as well, someplace where I can park my motor home for the colder months of the year. We are getting tired of the cold and Fl is nice in the Winter.
B

As I remember, it had a creek right next to it and you we're doing something about a deck and/or bridge. Tight wire or something for the deck railing.

The condo is so we have a "footprint" in the State. Long term (5+ years out), we're thinking of making FL our permanent residence. At that point, we'll get a house with land and outbuildings. Real estate is crazy down there so we're hoping in 5 years, it has calmed down and prices become more reasonable.

Here's a couple pics of the main area in the condo. Not pictured is the 3 bedrooms, 2 baths and garage. 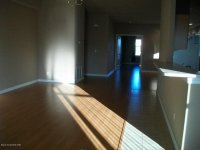 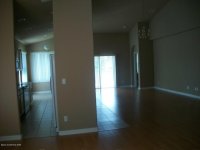 bczoom said:
Here's a couple pics of the main area in the condo. Not pictured is the 3 bedrooms, 2 baths and garage.
Click to expand...

Wowzers BC, that's nice! Florida is nice in the Winter, way too much humidity in the Summer. You'll probably like the change. Not sure how you're going to look in a Speedo though.
B

squerly said:
Not sure how you're going to look in a Speedo though.
Click to expand...

The entire forum community just got that image in their head and did a collective puke in their mouth.